|In Reviews, Movies
|By Tim Poon

There is a sentence—barely a line, really—in A New Hope. “Rebel spies managed to steal secret plans to the Empire’s ultimate weapon.” In that, Rogue One was conceived, giving the legendary franchise its first chance at fulfilling the ultimate and most beautiful promise of its mere existence. There’s a whole universe of stories out there. It’s about time we started telling them.

To be fair, it’s a promise that’s been handed off and roguishly fulfilled from pen to pen for the past four decades, whether in the countless fan fiction spread throughout the galaxy or in the deft and prodigious hands of Timothy Zahn. And Rogue One accomplishes its own narrative with the same best practices, skewing towards necessity rather than reverence, duty towards storytelling over fan service. Don’t get me wrong; there’s a great deal to enjoy here as a Star Wars nut, but it also stands on its own as a terrific film.

In doing so, it cherrypicks the best traditions of the movie trilogies. We have a hero that simply hasn’t had a chance to be a hero in Jyn Erso (Felicity Jones), daughter of the same defected Imperial science officer that led the design and construction of the original Death Star. Galen Erso (Mads Mikkelsen), however, is shanghaied back into service while Jyn is whisked far away from the danger and ends up growing up with a chip on her shoulder regarding the whole rebellion situation.

Along the way to the inevitable pilfering of the Death Star’s schematics, she accrues a ragtag team with her, each one fulfilling another Star Warsian archetype. There’s a Force mentor, a dedicated soldier to the righteous cause, an idiosyncratic droid, a puckish warrior with an impossibly resolved and collected partner, and so on. But also in true Star Wars fashion, it never feels like a chore rounding these fighters together, hurdling the follies of similar ensemble pieces like The Magnificent Seven.

No single player feels like an obligation to the framework. Instead, each introduction, as coincidental and fantastical as it can be for strangers to band together like this, is natural. Several unseen and ongoing tales weave together, and we just happen to pick it all up at the right moment. This is what defines the space opera: a galaxy full of unique individuals and these were the ones destined to leave a mark on it.

It’s fresh even in its delivery. There’s no particularly definitive adherence to the traditional three-act structure. Rather, the whole movie feels like a hard-moving and fast but deliberate and elegant stride to the finish, which was perhaps necessary given the fully aware and storied ending. It doesn’t dwell on the rote attempts of characterization and tension because it simply can’t, once again dodging the trap of films like, say, the entire prequel trilogy. (Or 2004’s The Alamo, if you’re looking for something less incendiary to examine.) 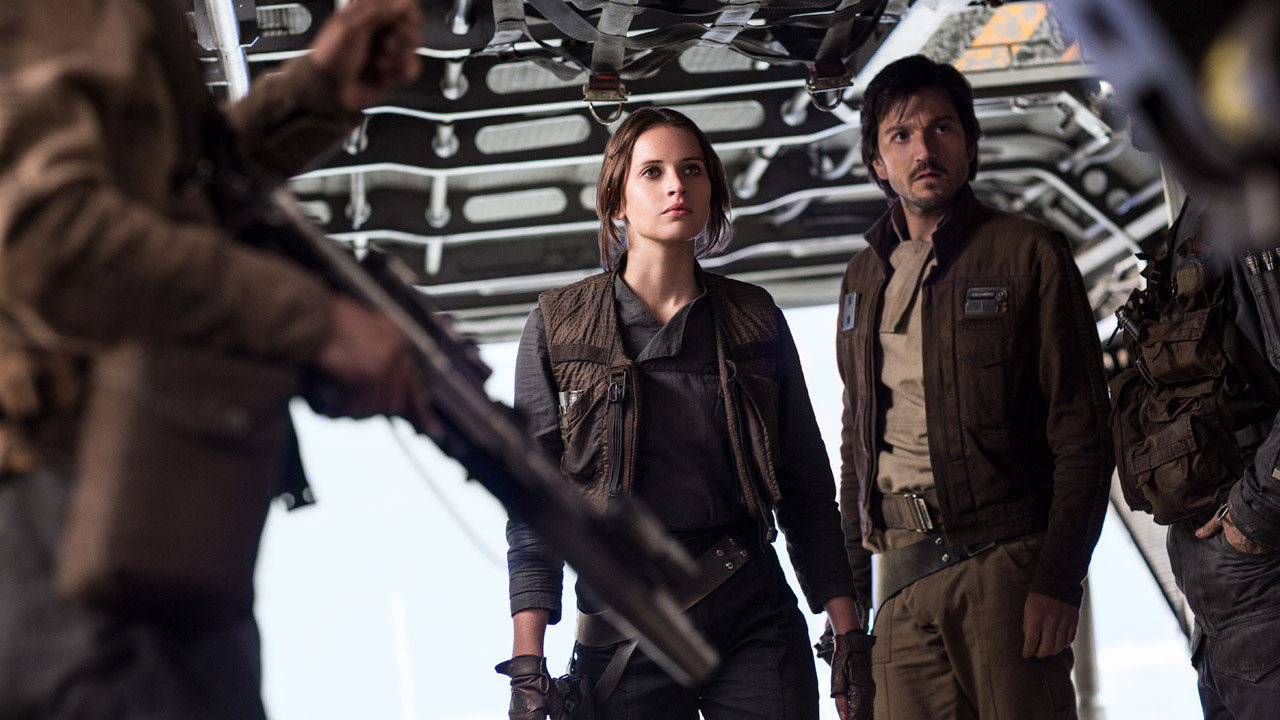 Unfortunately, not all get away unscathed. In not even attempting those character moments of growth, there isn’t much to even cite, opting instead to simply be “A Star Wars Story.” For example, Saw Gerrera (Forest Whitaker), an extremist rebel leader and veteran of the Clone Wars (a major player in the TV series Star Wars: The Clone Wars), is presented incredibly all the way up to his conclusion, but that ending is trite and, worse yet, largely inexplicable. It’s almost a shameful attempt to bring the film back to zero-sum state for Star Wars chronology and stasis.

The same goes for Galen’s entire arc, which is at the very least an impressive amalgamation of several MacGuffins all in one but not all that satisfying or surprising. But it is remarkable how natural the explanation is for how such critical information is loosed or even possible, settling into canon the answer of why the Death Star is vulnerable once and for all. Hell, there’s even potent emotional developments infused into it.

And sure, the initial appearance of Darth Vader (James Earl Jones) hews perhaps a bit too close to reverential, but it’s in the service of setting up an ending that is gorgeous in myriad ways. It pushes relentlessly into a revelation that, even if you were studious in the lore, is surprising and joyously exciting. And the overshadowed director of the Death Star in Orson Krennic (Ben Mendelsohn) achieves a symmetrical and stunning conclusion that, regardless of your academic history in literary flourish, is clearly tremendous.

More than that, the entire climax of the film and the moments leading up to it are nearly debilitating if you hold any amount of esteem for Star Wars. The critical moment of rebellion, informing and establishing the whole of the spirit of the Alliance’s eventual victory over the Empire, pulled on my historical heartstrings. This was 25 years of building cardboard lightsabers, scouring forums, and quoting Han Solo on a daily basis in the making. It was the precise sensation the prequel trilogy should have achieved but failed at so terribly.

Visually, though, it’s a sensational blend of the revamped and shiny dirt veneer of The Force Awakens and the original, nearly haphazard aesthetic of the 70s film. The beach-themed Stormtroopers and AT-ATs casually but wonderfully bolster the Imperial mythos. And the further we dive into the close of the film and we explore territories more and more familiar, the production seems to purposefully skew towards the strange retro-future of the original trilogy. Oversized helmets, humongous 10×10 pixel screens, and all.

The movie plays across the spectrum of new to old to new-old, spreading out over sweeping hills and planet-shaking waves. There are some shots that simply could not have ever been achieved in the days of yore, but they yield incredible and beautiful results. One in particular finally gives you a complete and overwhelming impression of what a gargantuan and impossible contraption the Death Star is. Fear, if it ever could be, is an understatement.

There are some delectable callbacks, too, built around the infusion of the old school. The shots involving the one guy the Rebels seem to have permanently assigned to a crow’s nest over every base with the singular purpose of watching ships take off are perfect, lending drama and mirth to those that realize it and just a good-looking shot to those that don’t. Some in-jokes are more obvious and deliberate and knock it out of the park, too, but the subtle references are far and beyond more savory.

One example of bowing to the past failing the film is where a couple of major roles are reprised through digitally reconstructed faces. They don’t ever look eerie or unsettling, mantling the other end of the uncanny valley, but it’s just enough…off to give it away. And there doesn’t seem to be any good reason to do it other than the ones reconstructed are rather iconic faces, but they recast Mon Mothma (Genevieve O’Reilly) during Revenge of the Sith and brought her back for this. Why not these other actors, too?

Speaking of the actors, pretty much across the board they’re all fantastic. Jones delivers her Jyn with consistent understanding and weight of her family’s baggage while still kicking plenty of ass. Diego Luna’s Cassian Andor is a terrific slant on his usual good guy, giving him some edge and menace in just the right places. And guaranteed, Alan Tudyk as reprogrammed Imperial droid K-2SO is going to be almost everyone’s favorite. (The cast diversity is also extraordinary and is worth mentioning, and not just because it continues the great Star Wars tradition of space accents.) 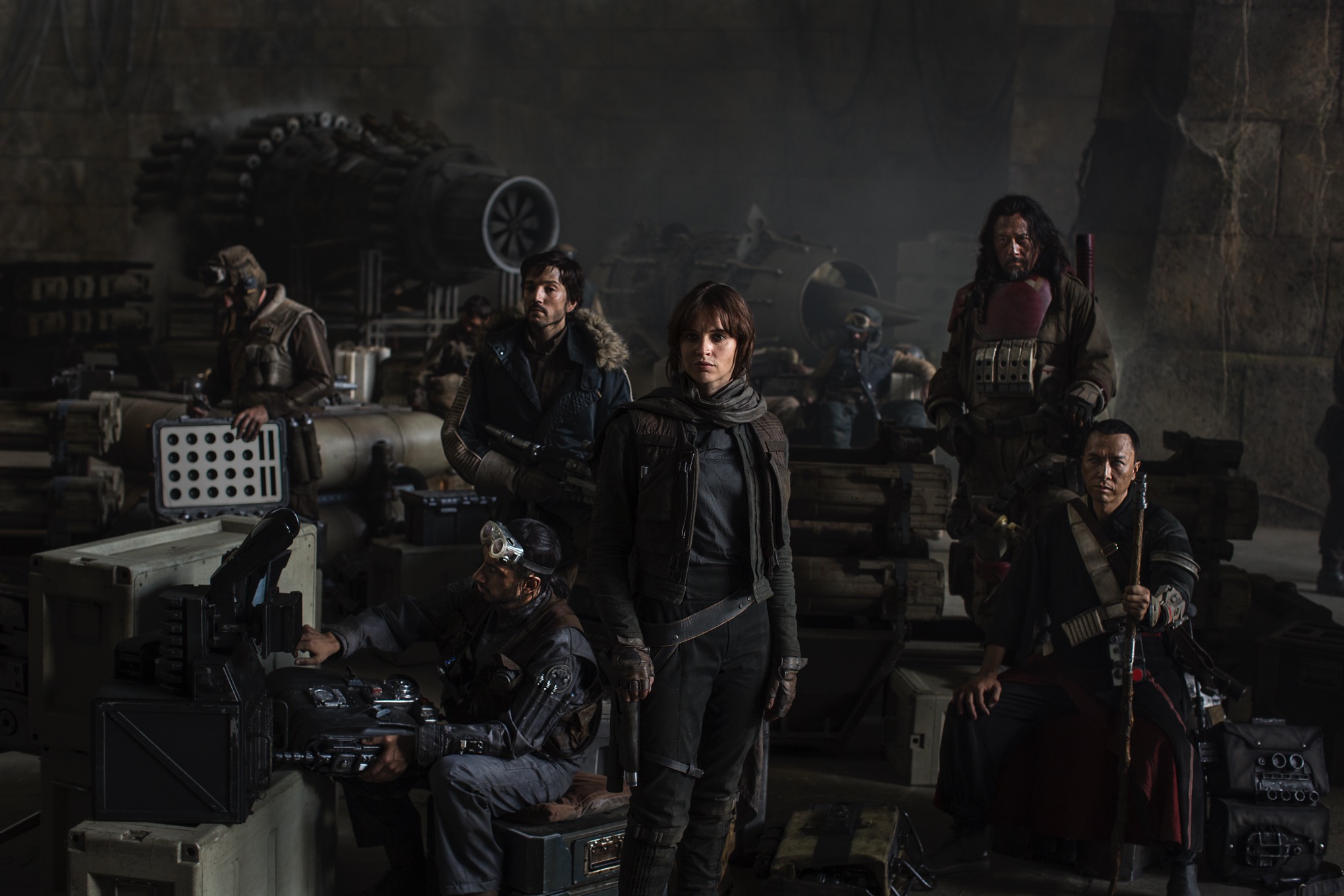 There was a fear going into Rogue One. Not into the itself or the premiere of the film itself but in what it would mean for Star Wars. So much has been swept under the rug already. There’s a terror and anxiety in thinking that would time would come again. But there’s no unsavory trade here. We give up this tender, unshaped ball of clay—ripped from one line of several from 1977—and we got back all that we could hope for.

[…] parts creating a surprisingly complex story, especially when compared to The Force Awakens or Rogue One. And in a philosophical sense, it’s because it came after those movies that it can reach a […]